Emergency Crisis Response to Save the USA 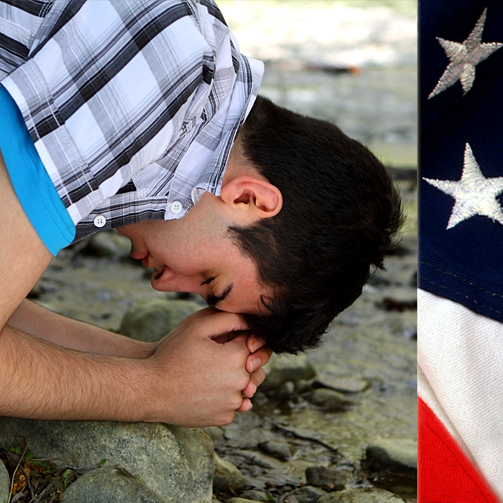 Steven Andrew is always ready, leading the nation with the Biblical response to safely handle emergency situations and to prevent national emergencies. USA Christian Church ministers to save the USA and millions of people’s lives by turning to God. Andrew teaches God’s Word to give answers to the greatest dangers the nation faces, from ending political corruption to preventing an economic collapse, and from border security to saving people’s souls.

Standing in the gap for the nation, Andrew asks God for mercy to turn away His wrath for our national sins, as he trains people and pastors to do the same. Andrew’s teaching ministry changes lives and heals families. He leads people nationwide to receive forgiveness for the USA’s sins so people are safe and live better lives by removing sin’s curse.

Leading the USA to be Right with God
USA Christian Church shares God’s answer for the nation. The Bible says the most important thing to save the USA is to reaffirm covenant that the USA serves the Lord. Andrew teaches nationwide to have as many people as possible join in covenant. This is ending God’s judgment and keeps you and the USA from dangers and going into captivity as happened to Israel (2 Chronicles 15 & 34).

Christian Government
Every day Andrew leads nationwide efforts calling and praying for a covenant Christian nation government, immediately. He shares the Bible teaches that serving Jesus as judge, lawgiver and king is the only way to “drain the swamp” of political corruption and to have justice (Isaiah 33:22).

Prevent an Economic Collapse
Andrew calls the nation to obey God and this brings God’s blessings. American history shows that people have better jobs and abundance as the nation follows Jesus Christ. The Bible teaches economic dangers come from tolerating false gods, homosexual sin, abortion, the occult (Harry Potter) and other sins (Deuteronomy 28, Matthew 6:33). Covenant is the secret to Biblical abundance instead of economic loss, as America is the most blessed nation because of loving Jesus Christ.

Protection
USA Christian Church brings safety to you and your loved ones by having God’s protection by Andrew ministering to people to serve the Lord. The Bible shows being in covenant secures the borders, brings peace and prevents war. Our safety comes from obeying God. In God we trust!

Saving Millions of People’s Lives
Andrew leads nation-wide efforts to teach covenant to save people’s lives.  This ends God’s judgment of the danger of captivity for false gods (Deuteronomy 8:19, Amos 5:26-27) and destruction for homosexual sin (2 Peter 2:6). Our hope is knowing that God shows mercy to us by people humbling themselves before God and following these ministry efforts.

Stand in the Gap

Steven Andrew relentlessly stands in the gap for the nation, asking God for mercy, so He would “not destroy it” (Ezekiel 22:30). He trains people nationwide to stand in the gap so people do not see God’s fierce judgment and lose their possessions and freedom as Israel did, when there was not one person standing in the gap.

Receive forgiveness for the USA’s sins by Jesus’ blood

So we are forgiven by God, Andrew leads Americans to confess the USA’s sins (1 John 1:9). This removes the curses for strange gods, same-sex “marriage,” abortion, witchcraft and other sins. Millions of lives are saved from the judgments of war, economic loss and political corruption.

As a caring pastor, Andrew ministers to people and follows Jesus Christ’s command to “feed my sheep” in John 21:16. Andrew has reached over 80 million people with the Gospel of Jesus Christ.

To help bring a covenant Christian nation government and greater national security, become a monthly partner  or make a one time donation.

Partner with us by donating today.