What Does the Bible Say About ‘LGBT’? 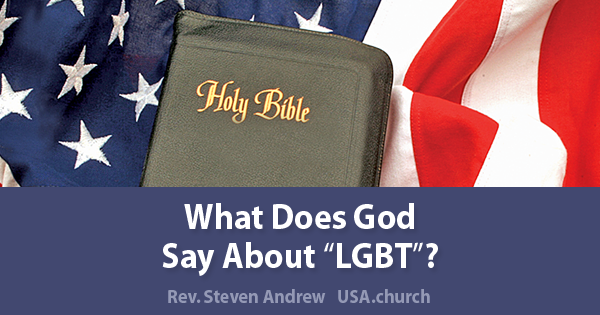 To save lives and the nation,  learn 25 truths you must know God says about LGBT. Share these truths with your loved ones.

What Does the Bible Teach about Homosexuality?

Everyone has an opinion; However, God’s opinion is love and truth, and what we are judged by. We need to be saved and to have our lives glorify God. Parents should be concerned for their children’s safety. As a nation, we need God’s protection.

Are you on God‘s side?

God is love. The Bible teaches homosexuals and lesbians: “Professing themselves to be wise, they became fools, and changed the glory of the uncorruptible God into an image made like to corruptible man, and to birds, and fourfooted beasts, and creeping things. Wherefore God also gave them up to uncleanness through the lusts of their own hearts, to dishonour their own bodies between themselves: Who changed the truth of God into a lie, and worshipped and served the creature more than the Creator, who is blessed for ever. Amen.” Romans 1:22-25

1. Homosexuals “professing themselves to be wise, they became fools.”

2. They “changed the glory of the uncorruptible God into an image made like to corruptible man.”

3. Homosexuals and lesbians oppose God, so He “gave them up to uncleaness through the lusts of their own hearts.”

4. Sodomites “dishonor their own bodies between themselves”.

5. Lesbians and homosexuals “change the truth of God into a lie”.

6. They “worship and serve the creature more than the Creator”.

“God gave them up unto vile affections: for even their women did change the natural use into that which is against nature: And likewise also the men, leaving the natural use of the woman, burned in their lust one toward another; men with men working that which is unseemly, and receiving in themselves that recompence of their error which was meet.” Romans 1:26-27

7. The Bible says, “God gave them up unto vile affections”.

8. Lesbians and sodomites “change the natural use into that which is against nature” and “burned in their lust one toward another”.

9. The Lord says homosexuals “receiving in themselves that recompence of their error which was meet”.

“And even as they did not like to retain God in their knowledge, God gave them over to a reprobate mind, to do those things which are not convenient;” Romans 1:28

10. Homosexuals and lesbians do “not like to retain God in their knowledge,” so “God gave them over to a reprobate mind”.

11. God is love and He says homosexuals are “wicked and sinners before the LORD exceedingly”.

“Thou shalt not lie with mankind, as with womankind: it is abomination.” Leviticus 18:22.

”Being filled with all unrighteousness, fornication, wickedness, covetousness, maliciousness; full of envy, murder, debate, deceit, malignity; whisperers, backbiters, haters of God, despiteful, proud, boasters, inventors of evil things, disobedient to parents, without understanding, covenantbreakers, without natural affection, implacable, unmerciful: Who knowing the judgment of God, that they which commit such things are worthy of death, not only do the same, but have pleasure in them that do them.” Romans 1:29-32

This brochure of God’s love and truth is to lead people to follow Jesus, so they don’t lose their souls and God does not destroy the USA. God does not call you to hurt anyone, but to love Him and “fear the LORD, and depart from evil” Proverbs 3:7.

13. The Bibles teaches homosexuals and lesbians are “haters of God”.

14. God says sodomites and lesbians are “inventors of evil things”.

“giving themselves over to fornication, and going after strange flesh…” Jude 7

15. Homosexuality is “going after strange flesh”.

“The woman shall not wear that which pertaineth unto a man, neither shall a man put on a woman’s garment: for all that do so are abomination unto the LORD thy God.” Deuteronomy 22:5

16. God says trangenders are “abomination unto the LORD thy God”.

God “delivered just Lot, vexed with the filthy conversation of the wicked: (For that righteous man dwelling among them, in seeing and hearing, vexed his righteous soul from day to day with their unlawful deeds;)” 2 Peter 2:7-8

17. Talking of homosexual acts is “filthy conversation” “the wicked” do.

18. God “delivered just Lot” out of Sodom and Gomorrah, “For that righteous man” was “vexed with the filthy conversation of the wicked”.

Join America Is On the Lord’s Side, with many top Christians and pastors nationwide.

“Even as Sodom and Gomorrha, and the cities about them in like manner, giving themselves over to fornication, and going after strange flesh, are set forth for an example, suffering the vengeance of eternal fire.” Jude 7

“And turning the cities of Sodom and Gomorrha into ashes condemned them with an overthrow, making them an ensample unto those that after should live ungodly;” 2 Peter 2:6

21. Since they rebel against God, homosexual societies are “condemned”.

“like the overthrow of Sodom, and Gomorrah, Admah, and Zeboim, which the LORD overthrew in his anger, and in his wrath:” Deuteronomy 29:23

“Then the LORD rained upon Sodom and upon Gomorrah brimstone and fire from the LORD out of heaven; And he overthrew those cities…, and that which grew upon the ground.” Genesis 19:24-25

23. Homosexual sin causes God’s fierce judgment, “like the overthrow of Sodom, and Gomorrah… which the LORD overthrew in his anger, and in his wrath”.

“where their worm dieth not, and the fire is not quenched.” Jesus, Mark 9:44

“there shall be weeping and gnashing of teeth.” Jesus, Matthew 22:13

24. Jesus teaches all in rebellion to God lose their souls to hell, “where their worm dieth not,” “the fire is not quenched” and “there shall be weeping and gnashing of teeth”.

God blessed the USA when the founding fathers made laws forbidding homosexual sin. Starting with the first laws of America, from the 1600’s to just recently, homosexual sin was illegal. The founders loved God and said:

“Abhorrence and Detestation of such Infamous Crimes” George Washington

Everyone loves and everyone hates. You either love God and hate sin, or you love sin and hate God. Those who call God and Christians “haters” are the real haters and bigots, for they hate God and people; they want people to stay in sin and lose their souls. Some call sin “love,” but encouraging people to sin is hate. The people who call those who obey God “homophobic” will suffer damnation, since God is anti-homosexual and that is basically calling God “homophobic”. Some think homosexuals are “gay,” but it is error to call sodomites “gay,” since “gay” is a positive word in James 2:3 KJV. Homosexual sin is not a Christian or American cause.

“If we confess our sins, he is faithful and just to forgive us our sins, and to cleanse us from all unrighteousness.” 1 John 1:9.

25. Father, I believe Jesus Christ died on the cross to forgive my sins. I don’t want people to go to hell and the USA destroyed. You say homosexuals, lesbians and transgenders are sinful and have “vile affections”. I agree. May pastors and everyone love people and teach Your truth. In Jesus’ name. Amen.

To save lives and for our national safety, Steven Andrew is leading the USA to reaffirm covenant that the USA follows Jesus Christ.

If our mission of raising 3 generations of the USA following Jesus Christ is important to you, then consider becoming a monthly partner or making a generous donation today.