Same-sex Marriage Is Not Law 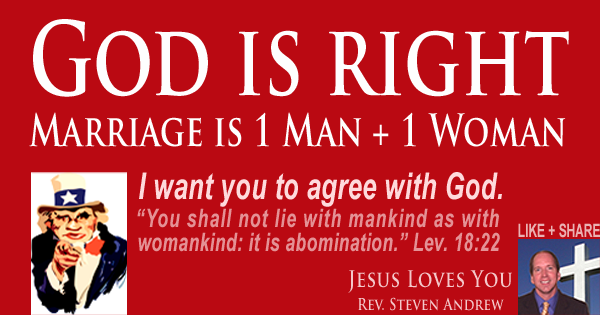 To save our lives and nation, Steven Andrew has boldly taken the stand that the USA only has traditional marriage.

This is important because God says He will remove the country for same-sex marriage, as He did Sodom and Gomorrah (Jude 7, 2 Peter 2:6, Genesis 13:13, Romans 1:24-32).  Andrew is pastor of USA Christian Church and leads One Million Americans on the LORD’s Side.

“You shall not lie with mankind, as with womankind: it is abomination.” Leviticus 18:22

When asked how to overturn the Supreme Court Obergefell opinion, Huckabee said, “on the same sex marriage decision I would simply say it is not law.” This was at the National Religious Liberties Conference held in Iowa.

Andrew adds that the First Amendment says Congress shall make no law prohibiting the free exercise of Christianity, so it is illegal to make any law against Christians freely serving the LORD. Our Founders show us that the USA has Christian religious liberty as the nation’s top priority. They put the Holy Bible in schools and Congress prayed in Jesus’ name.

National Emergency: The USA Is at Stake Because of Homosexual Sin

Same-sex Marriage is Not Law

“The courts can’t make law. If the president surrenders the entire executive branch power to the judicial, he’s surrendered to the doctrine of judicial supremacy, which leads us to what Jefferson, Madison, Jackson, and Lincoln all call judicial tyranny,” Huckabee continued to show that same-sex marriage is not law.

Andrew, who’se One Million Americans on the LORD’s Side group is saving the USA, explained that God commands to have marriage of of one man and one woman only, so same-sex marriage is not law.

Further clarifying on same-sex marriage Huckabee said, “It is not law because the people’s elected representatives have not made it law and there is nothing in the Constitution that gives the Supreme Court the power to make a law. They are the Supreme Court. They are not the supreme branch or the Supreme Being. They can’t make law.”

“Simple ninth grade civics… reminds us that there are three branches of government that are equal… There are separation of powers and there are checks and balances,” Huckabee continued.

“When people say what can we do? Let’s introduce a Constitutional amendment. No, let’s just… exercise the power that is already within the Constitutional authority… The president [should] simply say, ‘Thank you for your opinion but we shall ignore it because there’s nothing in the Constitution that affirms that and we are not going to impose upon all 50 states something that the federal government has no control over-which is the definition of marriage,’” Huckabee said.

God says to choose those who fear God for leaders in 2 Samuel 23:3 and Exodus 18:21. To fear God is to obey Him, doing what is right in His sight.

Rev. Steven Andrew is leading the fight for marriage in calling the USA to repent of homosexual sin so God will not destroy the USA. He has shared the Gospel message about marriage with millions of people since the Supreme Court’s unconstitutional opinion, and wants people to fear God. He has great confidence in God, as God is sovereign and always wins. “Each of our consciences should convict us of sin. Scripture teaches that we are to obey God rather than man,” the Christian leader said.

The pastor’s nation-saving book, “Save America,” reveals seven Bible Truths that save the USA from destruction. The book gives God’s answer for the USA’s future. It is the most comprehensive book with Biblical truths to save our nation from God’s further judgment.

Based on Scripture, God will bless the USA more and more when people choose Christian leaders who obey God, from school boards to federal representatives. Judge Roy Moore is known to follow God and to be someone that God would bless the nation with.

Mike Huckabee says same-sex marriage is not law, would end abortion immediately by the 5th and 14th Amendments, believes the USA is a Christian nation and obeys the Constitution.

Andrew hopes that voters will cry out to God to have Christian leaders who say same-sex marriage is not law, so God will bless our country and the USA won’t be removed for opposing God.

To Have God’s Protection, Steven Andrew Calls the USA to Obey the Bible

Steven Andrew Answers What Are the 4 Greatest Dangers to National Security?

To Save the USA Steven Andrew Leads the Nation to Repentance