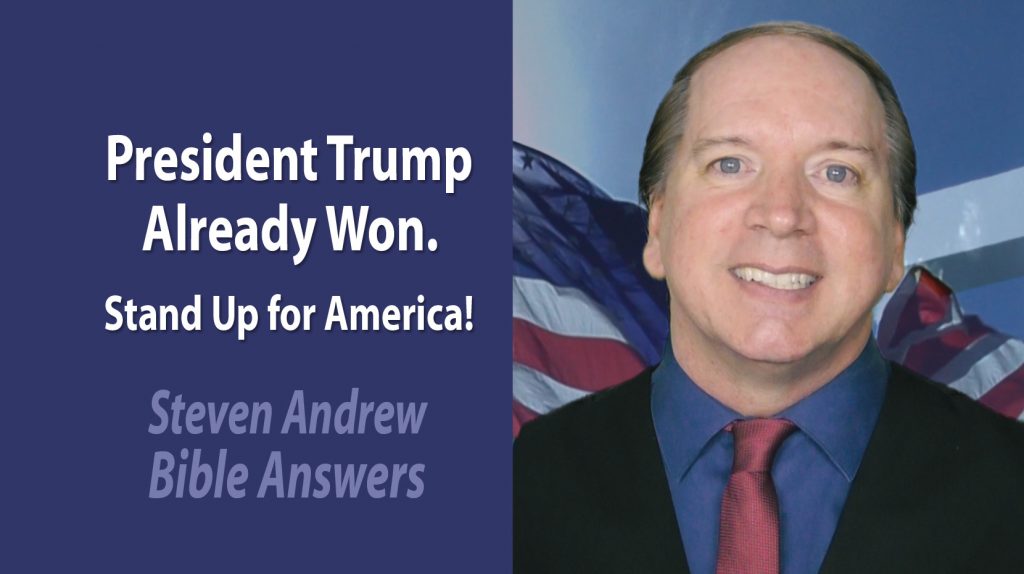 (Press Release. San Jose, CA, 12/3/2020) Christians in the group America Is on the Lord’s Side are boldly standing up that President Trump already won the election. They support President Trump and the actions he takes for election integrity, including emergency powers. Steven Andrew leads the group defending the president in a video. Andrew has reached over 80 million people with the Gospel and also calls for national repentance to bring God’s favor for President Trump.

“President Trump was far ahead Election Day and won before the additional massive voter fraud and ballot stuffing,” Andrew said. Andrew agrees with the president who said in a speech he is “to defend the laws and the Constitution of the United States” and “protect our election system, which is now under coordinated assault and siege.”

Andrew said, “Stand up for America by demanding President Trump is president four more years, for he won without question.” President Trump said, “The corrupt forces who are registering dead voters and stuffing ballot boxes are the same people who have perpetrated one phony and fraudulent hoax after another.”

“God’s will is President Trump because he is pro-life, loves America, defends Christian religious liberty, and improves the economy which also helps the poor,” said Andrew.

Andrew continued, “God says ‘turn away’ from Joe Biden and the Democrats, because they removed God from the Pledge of Allegiance at the 2020 DNC.” In addition, “President Trump called Congress for a bill to end late term abortion, but the Democrats refused; God is against Biden, Obama, and Democrats, since they advocate to leave babies to die who survive abortion,” Andrew said (Psalm 7:11, Exodus 20:13). “God is against those helping the wicked,” for God says to “justify the righteous, and condemn the wicked” (Deuteronomy 25:1, 2 Chronicles 19:2).

Andrew believes putting Jesus first place in our lives and nation will save the USA from socialism’s poverty. Andrew calls to welcome God to all government by obeying Jesus as judge, lawgiver, and king of the USA, as the Bible and the founding fathers teach (Isaiah 33:22). “We have fair elections when we honor God,” Andrew said.

For updates join America Is on the Lord’s Side.

To heal our land, Rev. Steven Andrew is leading the nation to reaffirm covenant that the USA serves the Lord. Andrew is pastor of USA Christian Church and CEO of Pro-America USA.Life social network and 1776Free search engine.

Stand Up for President Trump and Covenant to Heal Our Land; 1/20/21