Join Steven Andrew to Call on God and to Demand Justice to Put President Trump in the White House Now! 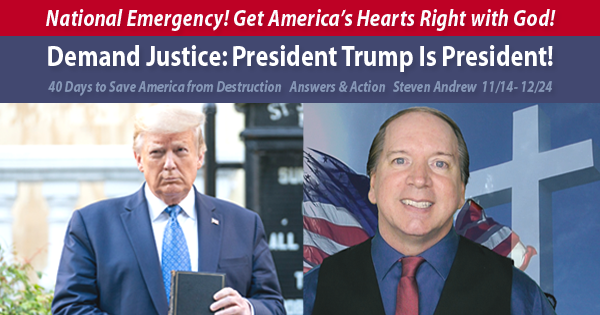 TO SAVE AMERICA FROM COMMUNIST DEMOCRATS, POVERTY AND ELECTION FRAUD, STEVEN ANDREW LEADS THE NATION TO REAFFIRM COVENANT THAT THE USA SERVES JESUS CHRIST AND DEMANDS JUSTICE THAT PRESIDENT TRUMP IS PRESIDENT.

Will you join Steven Andrew to save America from destruction? We will save our country and see the greatest revival by daily taking one hour, doing the three points in this article and sharing with your church, groups and others. For updates join the group “America Is On the Lord’s Side”. Check back for updates daily.

The USA is seeing God’s judgment for our national and personal sins. We must get our hearts right with God as a nation, call on God to deliver the USA and to demand justice that President Trump already won! We will bring the Kingdom of God with liberty and see God’s judgment on the corrupt communists who violate the Constitution.

Look at the national emergency. Enemies foreign and domestic declared war against America. The Bible calls this “they that hate you shall reign over” and it is from disobeying God’s Word and the people breaking covenant by not saying the USA is a Christian nation, Leviticus 26:14-17.

What can you do? Read below, watch the video and each day cry out to God for deliverance and do what this brochure says now. This page will be updated in the next week as Steven Andrew seeks the Lord. God healed the land of Judah when King Asa and King Josiah renewed covenant (2 Chronicles 15, 2 Chronicles 34). Will you join Steven Andrew to reaffirm covenant? God will save America!

Do you understand how serious our national emergency is? The Bible teaches the USA is close to losing everything – freedom, homes, families and more. Communist Democrats are destroying America by defunding the police, raising taxes, corruption, fraud, violating God-given rights and the least secure border in history – bringing in millions of illegal aliens, including COVID infected, criminals and terrorists. Unless this generation agrees to serve Jesus Christ in covenant like our founding fathers, then people could lose everything as happened to Judah (2 Chronicles 36). Jesus Christ is the Savior, the KING OF KINGS, the son of man and the Son of God. God commands all of creation to follow Jesus Christ. Psalm 2 says “Kings… judges… serve the LORD with fear… Kiss the Son” and Mark 12:30 says the first commandment is to “love the Lord”. All lawful “government shall be upon his shoulder” Isaiah 9:6. The Jamestown Settlers planted a tall cross on Virginia Beach and covenanted America to Jesus Christ “to all generations”. The Pilgrims, Puritans, John Hancock, John Adams… and me continue in covenant. Remember, God brought Judah into captivity for false gods, “abortion,” homosexual sin, the occult and corruption. God is merciful. He is giving us an opportunity to turn to Him and save our lives, country and loved ones.

What sins caused God to not fully protect the country? Those not calling for a Christian government “ruling in the fear the LORD” as Samuel 23:3 says and the those not standing up that Ephesians 5:23 says “Christ is the head of the church” and churches are most essential are some of the great sins that brought massive corruption. People know President Trump already won on Election Day, as audits and analysis prove. Then enemies foreign and domestic “stopped the counting,” pulled out suitcases of secret ballots and added more fraudulent votes, because the fraud they added before wasn’t enough for them. The true problem to solve is what does God’s Word say to do so God puts President Trump in the White House now. God is waiting for us to get right with Him. He says, “I will go and return to my place, till they acknowledge their offence, and seek my face: in their affliction they will seek me early.” Hosea 5:15.

I seek God continually for the nation and found the Biblical answer. We must reaffirm covenant that the USA obeys Jesus Christ, demand justice and continually put our trust in God to deliver us (2 Chronicles 15). We need God’s mercy. We know the Lord rules over all. I am Steven Andrew. God raised me up to save America by leading nationwide revival agreeing Jesus is judge, lawgiver and king of the USA, as the founding fathers established (Psalm 33:12, Isaiah 33:22). We know the USA’s covenant with God from our founders is what brings blessings and protection.

Will you join me to bring God’s favor? Some people don’t understand that getting right with God is required to heal our land and restore safety (2 Chronicles 15, 34, 7:14). Our national sins caused our troubles. Joshua was defeated because of Achan’s sin and Israel could not win until they repented. Other times the Philistines invaded Israel, because they didn’t keep covenant (1 Samuel 7:3-4). In the Old Testament they killed Achan; however, today as Christians we turn away from and reject those mocking God and cursing the nation (2 Timothy 3:5, Titus 3:10). We witness to sinners, but we don’t vote for or follow them. By cheating against President Trump, our enemies committed treason. Analysis and audits prove foreign and domestic enemies declared war against America. Therefore, we pray for God to defeat and scatter the USA’s enemies.

The only way to save America is to:

Many put their trust in man or courts, or they don’t fight. But America is one nation under God! Remember, Judah was still a covenant nation with evil Manassah. Then because of covenant God raised up King Josiah. By making God top priority, we have confidence Jesus Christ will save America!

1. God’s Favor: Get Our Hearts Right with God

How do we restore God’s favor? The answer is to reaffirm covenant with the founding fathers. Agree:

Now, will you renounce the ten sins below? These are great sins that provoked God to allow a partial invasion of the USA by the communist Democrats. People, churches and politicians have sinned against the Lord. If you committed any of these sins, confess them to God and receive God’s forgiveness (1 John 1:9). Now, agree with God and declare: I renounce:

Forgiveness: Think of God’s grace. Jesus Christ died on the cross to forgive sinners. Jesus Christ’s blood makes it so even the chief of sinners can be forgiven. If you are not a Christian, call on Jesus Christ to save you. To be a strong Christian, pray and read your Bible morning and evening and keep these covenant points.

We know God commands the USA to demand justice to “justify the righteous:” President Trump and all who won “and condemn the wicked” cheaters (Deuteronomy 25:1). God says those who consent to a thief are “wicked” (Psalm 50:14-16). If we give in to corruption and “justify the wicked” Democrats and RINOs then God can’t help us (Proverbs 17:15). After President Trump won, analysis shows the USA was invaded by a socialist-marxist coup by lies and “stopping the counting” to add more fraudulent votes. Massive fraud occurred before. They violated election laws. Reports show foreign and domestic enemies in the Democrat Party, big media “fake news,” the deep state and many RINOs and courts block evidence, commit treason and collude with China, Iran…

The cheating is massive. A few examples that have been reported are:

Do we want freedom or tyranny? President Trump loves America and honors God, but these traitors hate America, ruin the economy and violate the Constitution. God’s will is President Trump! We know President Trump secures the border, plays “God Bless the USA,” lowered taxes, brings job back and is pro-life. Democrats betray God and America, as they removed God from the Pledge of Allegiance and leave babies to die who survive abortion. Biden’s first $6 trillion debt raised taxes by $119,000 per person and Biden brings in millions of illegal aliens who are criminals, terrorists, rapists and COVID infected.

God says the real reason for enemies invading is our sins brought judgment on the nation with “they that hate you shall reign over you” (Leviticus 26:14-17). “Israel went into captivity for their iniquity” (Ezekiel 39:23). Our only hope is to turn to God. We see about 97.5% of the captivity judgment for the sins God destroyed Judah for. If we don’t reaffirm covenant, the full judgment is families taken away, losing homes, poverty and millions killed. America won’t be saved unless we agree we are a Christian nation. Will you daily repent of your sins? If we “help the ungodly” Democrats and traitors, God “wrath” is upon us. Remember, 2 Chronicles 19:2 says, “Shouldest thou help the ungodly, and love them that hate the LORD? therefore is wrath upon thee from before the LORD.” Are you on the Lord’s side?

3. God’s Deliverance: In God We Trust

We know it is Jesus Christ who delivered America in 1776 and Jesus Christ will save the USA now. To have law and order will you continually put your trust in the Lord to put President Trump in the White House and all who won in office right now? An easy way to trust in God is to rely on Him in faith for deliverance by trusting God’s Word.

Father, You, Lord, are America’s God. Forgive our sins by Jesus’ blood. We cry out for You to deliver the USA from all enemies foreign and domestic, immediately. We trust in You to defeat our enemies. We rely on You. In You we trust! Help each person obey You to agree the USA serves Jesus Christ and demand justice that President Trump is President. All who won are to be in office with a full term. We trust in You to condemn and punish cheaters for treason. Everything the cheaters did is canceled. As 1 John 3:8 teaches, destroy all the works of the devil. We cry out for a covenant Christian nation government now. In Jesus’ name. Amen.

Next, get involved by seeking God and doing these action steps an hour a day with me to Save America!

God wants churches to arise to the 1776 Christianity level, where we surrender all to Jesus Christ as mature Christians and demand the USA obeys Jesus in government, churches and homes. God commands all creation, including We the People and our representatives, to “Kiss the Son” and obey God’s Word (Psalm 2).

Thanks for your prayer and support. We believe God for breakthrough! Jesus Christ will save the USA!

P.S. Nothing is more important than getting right with God. If you want to save lives and America, can you help us reach more people with the Gospel and Covenant? Become a monthly partner or donate today to make a difference!

If our mission of saving America and raising godly generations is important to you, then be part of this ministry by donating today. It is urgent we turn to God.