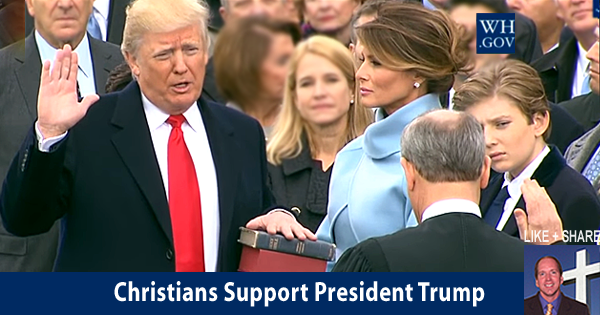 Donald Trump is a huge improvement over crooked Hillary and Barack Obama. As Christians, we understand God raised up President Trump to undo many of His judgments the nation had for our national sins, explained Andrew.

“Christians support President Trump where he follows Jesus Christ, and thankfully this is many areas,” Andrew said. He leads One Million Americans on the Lord’s Side, the top Americans saving the USA. Sign Up Here.

To those who doubt Trump, Andrew says, “In God’s sovereignty, the Lord knew President Trump would grow closer to Him. No matter what anyone thought about Donald Trump before, we now see President Trump is following God in many ways (John 14:21).

Can you give $10 to defend Christianity?

Steven Andrew wants God to bless Americans and to have God’s favor. This comes by obeying the Holy Bible.

While Andrew thanks God for President Trump, he explains there are two sins the President – as well as many ministers – must repent of. These are really the pastors’ sins; however, all government is commanded to obey God (Pslam 2:10-12, Mark 12:30, Isaiah 33:22):

If you want God to end all the judgments on the nation, then reaffirm covenant here.

Do you want to help disciple the nation? You will make a difference by becoming a monthly partner with Steven Andrew or by giving a generous one time gift today. It is urgent. Lives are at stake.* To give by mail click here.

Thank you for your most generous support to the Lord.

TO BE ABLE TO SHARE GOD’s WORD IN POLITICS, USA CHRISTIAN CHURCH CAN NOT BE A NON-PROFIT
Money given to USA Christian Church is not tax deductible. If you want the equivalent of a “tax-deduction” simply subtract that amount before giving. Learn more.

All transactions on USA Christian Church are secured.