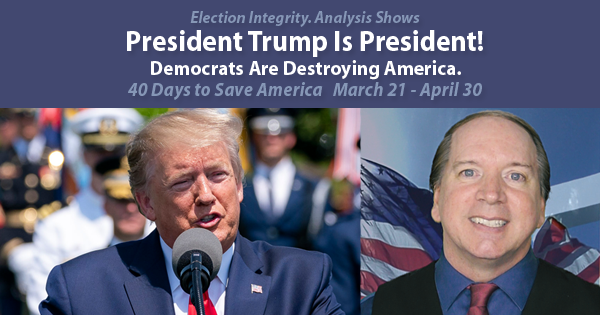 1. Speak Up: We Believe Analysis Shows President Trump Is President.

Witness in MI Hearing talks about truck of mail-in ballots showing up at 4 a.m. on election night

Call for an open and transparent election audit. We the people are in charge. The Constitution and Bill of Rights affirm we have free speech, freedom of the press, the right to peaceably assemble and all our God-given rights of life, liberty and the pursuit of happiness. As Americans we agree no one can take away our rights.

Why does the USA need God’s mercy? The answer is because many people are indifferent about sin, such as false gods, abortion and homosexual sins. However, the Bible shows Lot’s response of being “vexed” with the people openly sinning against a holy God. 2 Peter 2:6-9 says that God “turning the cities of Sodom and Gomorrha into ashes condemned them with an overthrow, making them an ensample unto those that after should live ungodly; And delivered just Lot, vexed with the filthy conversation of the wicked: (For that righteous man dwelling among them, in seeing and hearing, vexed his righteous soul from day to day with their unlawful deeds;) The Lord knoweth how to deliver the godly out of temptations, and to reserve the unjust unto the day of judgment to be punished:”. According to Scripture, God’s will is for us to be vexed about national sins. We want God’s mercy, because false gods, abortion and homosexual sin have brought God’s wrath. The Democrats hating America are God’s judgment. We see Biden and Democrats trying to destroy the economy, borders and small businesses. Will you join me in prayer? Father, You are merciful. In wrath remember mercy. In Jesus’ name. Amen.

Father, I thank You that Jesus died on the cross to forgive my sins. I trust in Jesus as my savior. I seek You with all my heart and soul to guide me in my life in all I do. Help me underst and the Bible with Your Holy Spirit. in Jesus’ name. Amen.

Father, You say “when the children of Israel cried unto the LORD, the LORD raised up a deliverer to the children of Israel, who delivered them” in Judges 3:9. I cry out to You for justice, truth and liberty for the USA. Open the doors for President Trump and all other Republicans who already won to be sworn in to office now. In Jesus’ name. Amen.

We must save America. The Bible teaches if we seek God He will answer us. Expect breakthroughs. I am daily seeking God for the USA for justice that President Trump is President in the White House and fasting 40 days from 5pm to 12am daily. We must be a nation of law and order. We are seeking God to “justify the righteous” all who won “and condemn the wicked” all involved in cheating and/or treason. If you fast you may need to consult a doctor. The purpose is to seek God until we find Him.